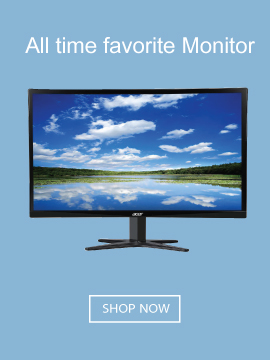 On April 20, 2016, Western Digital launched the new WD Gold family of hard disk drives. These hard disk drives are designed for maximum performance and reliability in the highly demanding datacenter. They are designed to handle workloads of up to 550 TB per year (1.5 TB per day), with a MTBF rating of up to 2.5 million hours!

Today, we are going to take a look at the 8 TB Western Digital Gold hard disk drive. This is one of the two helium-filled WD Gold models to feature a hermetically-sealed chassis with an internal helium environment. That’s not what’s different though. For your convenience, we created a specification comparison of the WD Gold family of datacenter drives:

The WD Gold 8TB (WD8002FRYZ) hard disk drive came in a sealed anti-static plastic pack. Notably, it lacked the usual sachet of desiccants. That’s because the drive is hermetically-sealed in the factory, and filled with helium. Also notable is their use of two gold-coloured screws to lock the PCB in place. 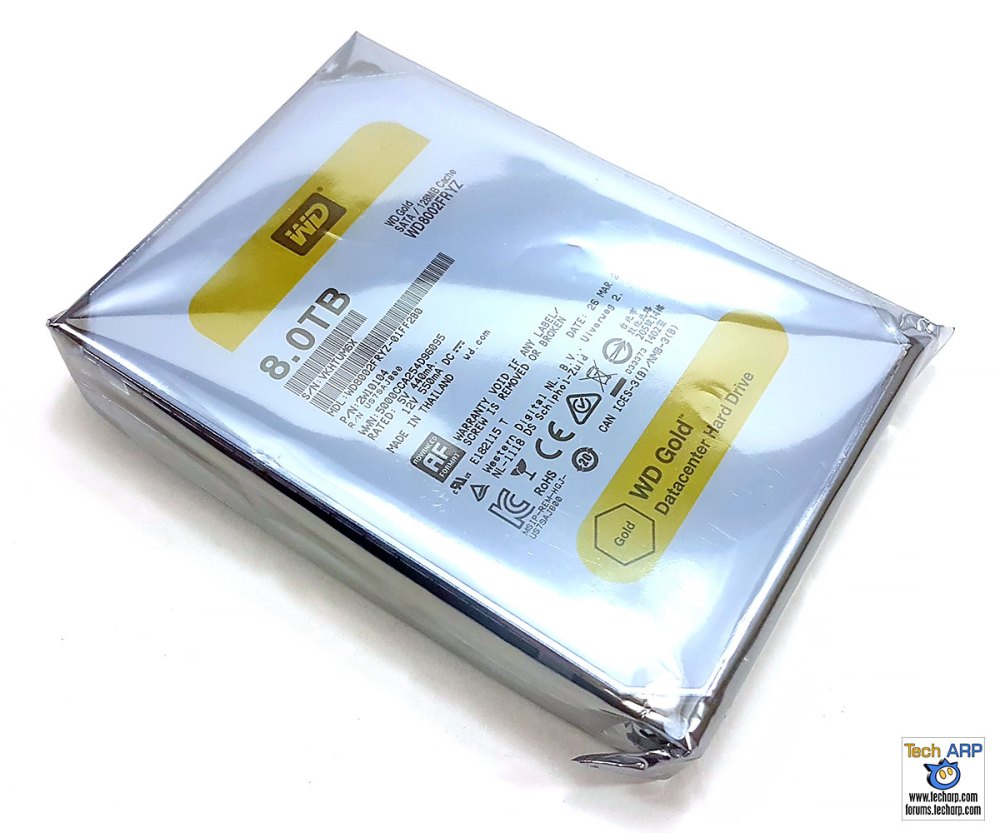 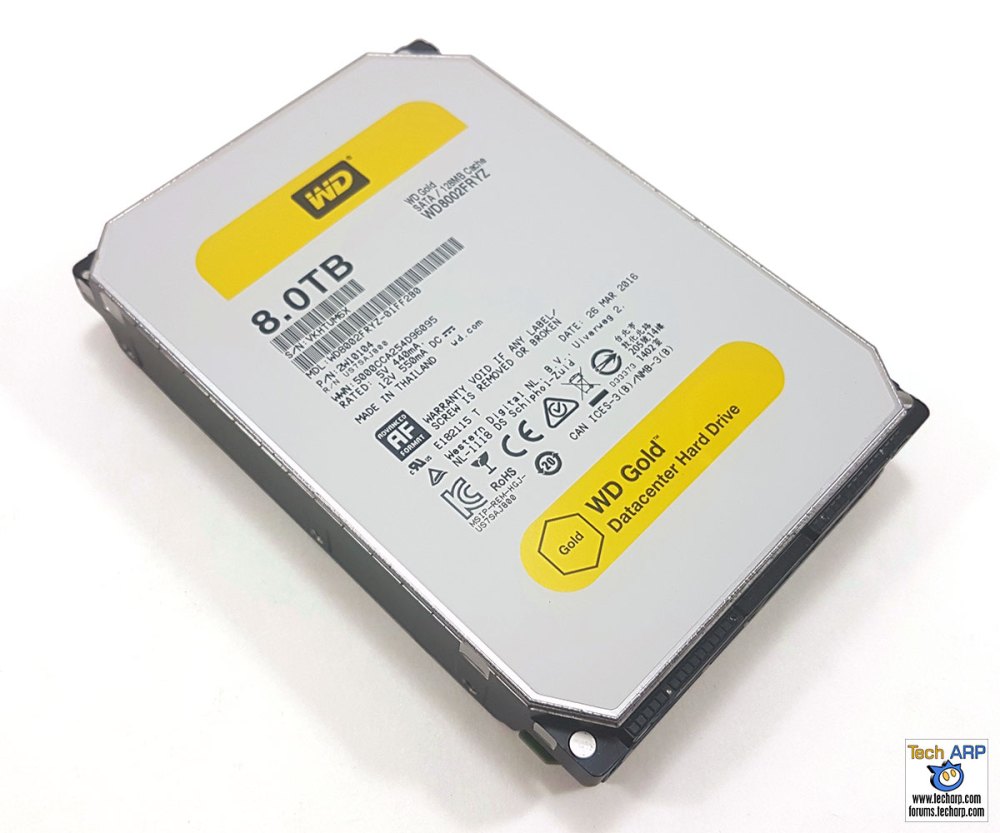 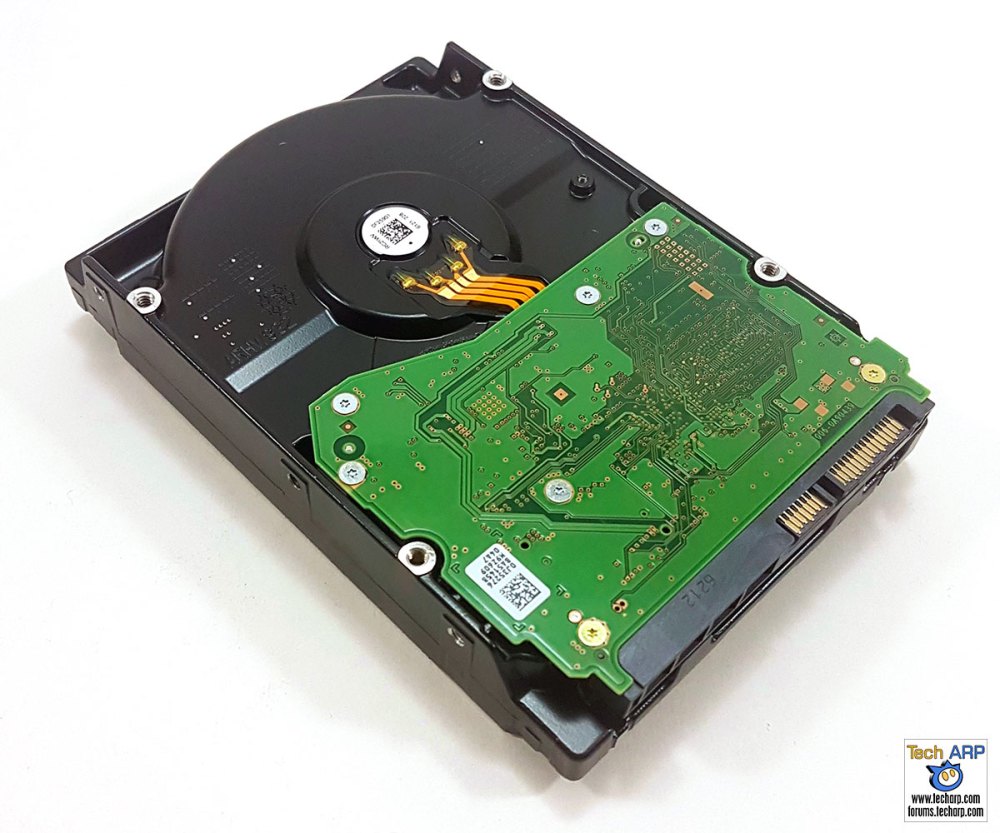 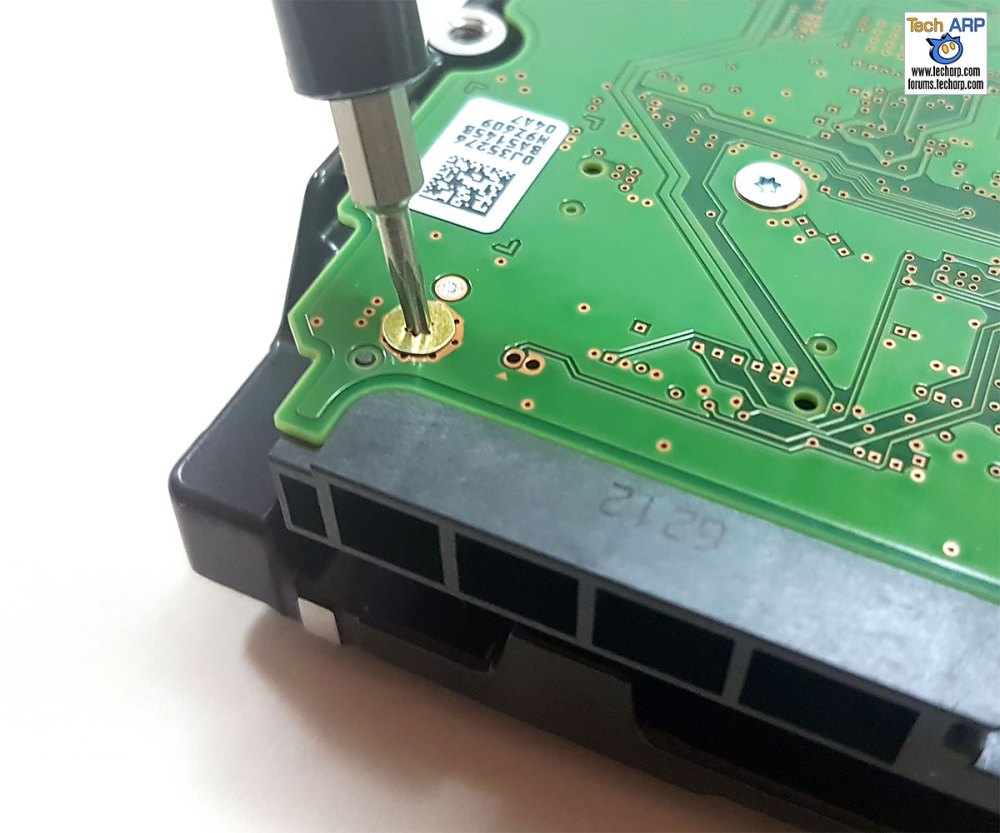 To remove the drive, just tear off the top or cut it open, and slide out the drive. Be sure to ground yourself before removing and handling the hard disk drive as static can damage it. In particular, you should try to avoid touching the exposed PCB located on the lower underside of the drive.

Despite featuring a hermetically-sealed chassis, the WD Gold 8TB (WD8002FRYZ) datacenter drive looks deceptively like any other 3.5″ desktop hard disk drive. In fact, it has the same label on the top plate, with an uncovered PCB on the underside. 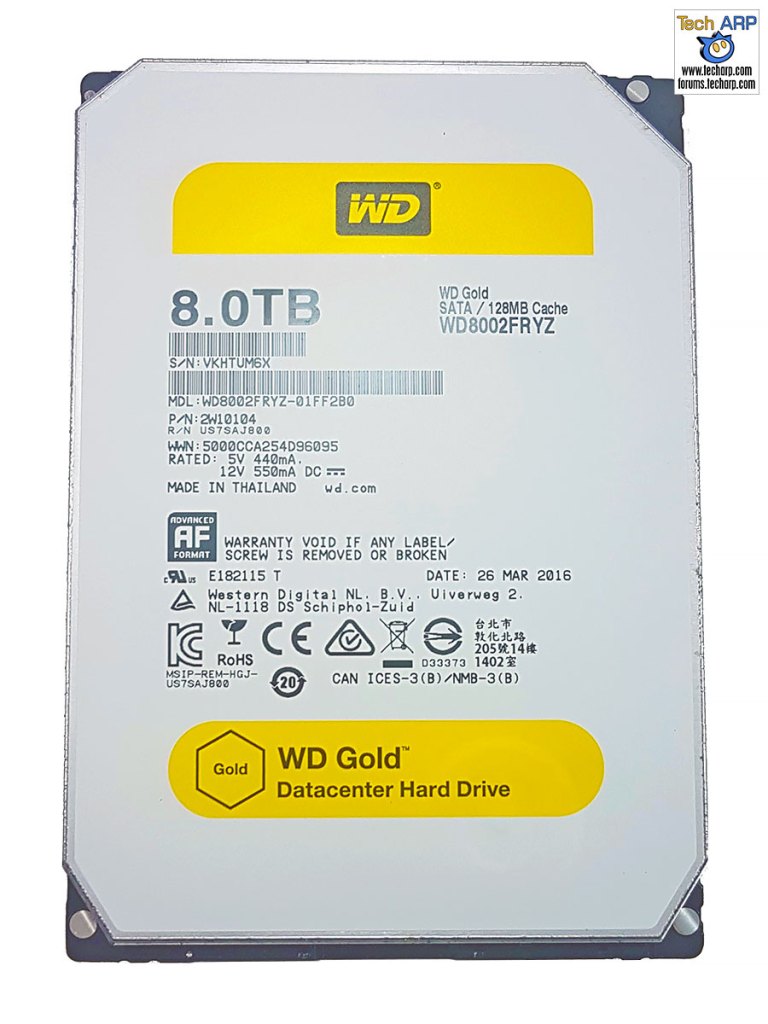 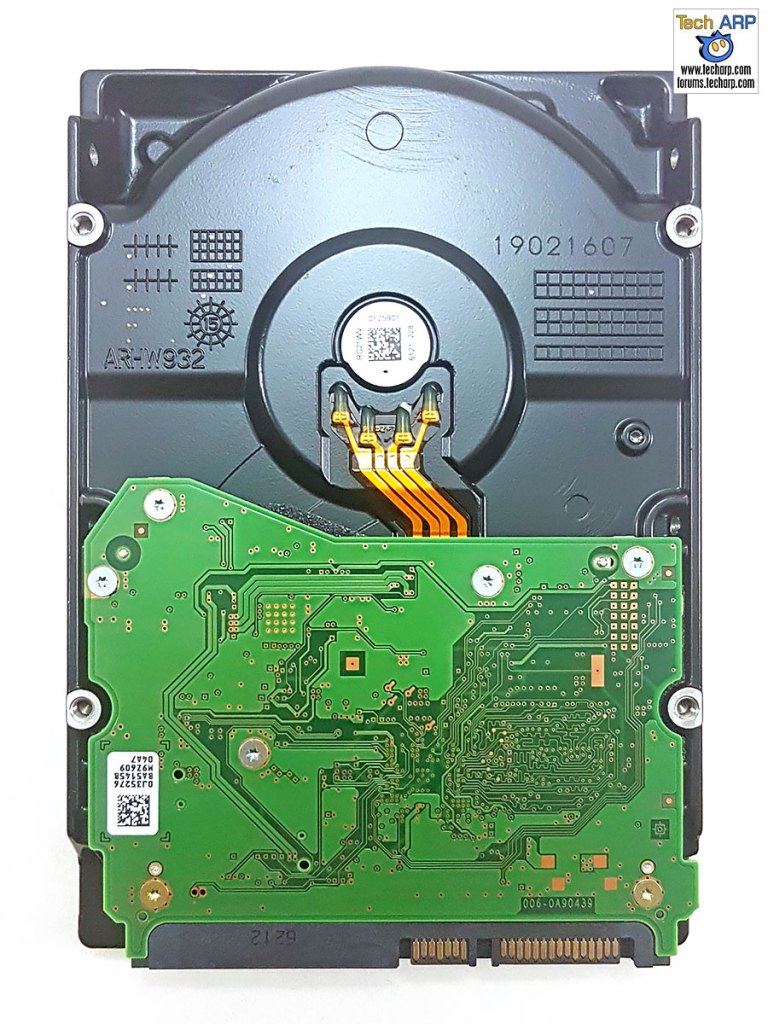 The label has a lot of important information, like the hard drive model, storage capacity as well as its date and place of manufacture. This particular drive was manufactured in Thailand on the 26th of March, 2016. You can also see that the drive uses the Advanced Format Technology to achieve its high storage density.

The WD Gold 8TB datacenter drive is one of the few hard disk drives in the market to feature the revolutionary HGST HelioSeal technology. Its is hermetically sealed at the factory, and filled with helium. The hole, which normally serves as the breather hole in a normal “air-filled” hard disk drive, is likely the port through which the air is extracted and replaced with helium. 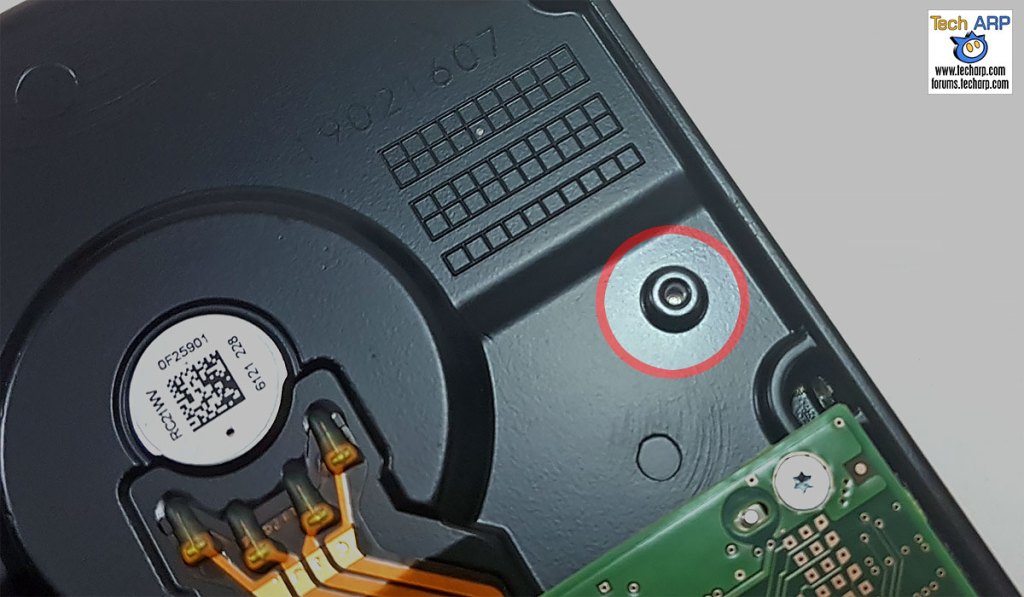 Because helium is only 1/7th the density of “regular air”, it allows for less friction delivering the following benefits :

The only things stopping helium-filled drives from becoming mainstream is the relatively high cost of helium, and the difficulty in sealing the drive.

This feature was mentioned only perfunctorily in the Western Digital press release, which led many writers to assume that they added a NAND flash cache, like the ones used in SSHDs (examples : 4TB WD Blue SSHD, 1TB WD Blue SSHD). Unfortunately, that’s not true.

The media caching technology used in the WD Gold datacenter drives are also a HGST technology, like HelioSeal. It doesn’t actually use any additional components, just the SDRAM cache and the hard disk drive platters. This is how it works :